I have tried using e.g. OSCOLA citation style and a number of others, but I cannot find a way to enter information in the reference fields to show properly referenced English case law references, e.g. Blindley Heath Investments Ltd v Bass [2017] Ch. 389, where the two names are the parties/case name, 2017 is the volume year, Ch, is the series (Chancery cases) and 389 is the page on which the report starts in the 2017 volume. Or e.g. A v B [2008] EWCH 2687 where A and B are the parties, 2008 is the year and EWCH is a "neutral citation" standing for an England & Wales case in the Chancery Division. Or e.g. Bridge v Deacons [1984] A.C. 705 where A.C. is a reporting series called Appeal Cases. The only way I can get these to appear properly as citations is by using the whole citation as the Court (when using reference type Court Decision), but then there is no short name like Blindley Heath for the second appearance of Blindley Heath Investments Ltd v Bass [2017] Ch. 389 and no short form footnote for a second footnote, e.g. Blindley Heath ibid. Instead each citation appears as Blindley Heath Investments Ltd v Bass [2017] Ch. 389 which is simply wrong as a citation style and clogs up pages or paragraphs with multiple long form references. And the case names aren't even in italics as would be normal.

How can I enter references so that the second and subsequent appearance of case names in text and in any footnotes is properly formatted in short form?

I propose to enter the data as follows: 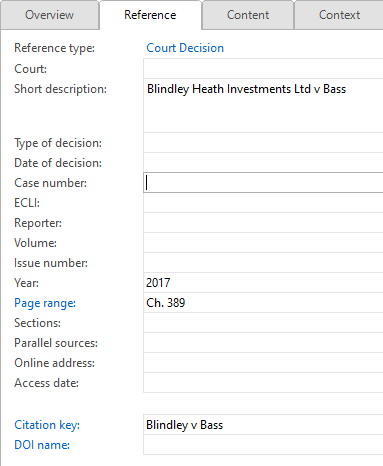 (If you don't see the Citation key field yet: Select the "Citation Key Support" checkbox in "Tools" > "Options" > "Citation". Click "Configure" to set the format to "Title" (the first word of the title, omitting the article) or download the citation key package from http://www.citavi.com/citationkey-firstword and follow the instructions given there. )

This is the result in Word:

Thanks, that appears to work in the reference page. I will also try in Word.

But this method has changed the Default style, so with articles it has changed the citation to the first word of the article name, instead of Author and Year which is more normal. I am not sure how to get that back. Do I select [Author, editor or organization][Year derived] to get the default back, or is it some other combination?

When I try to "Add template for reference type" and choose "Court decision" the dropdown list does not contain "Title". How do assign "Title" as the citation key only for "Court decision"?

I have understood your question to refer to the Citation key field. If you are using the Oscala style, this field may only contain one keyword that represents the full title of the work. The following example will illustrate this. 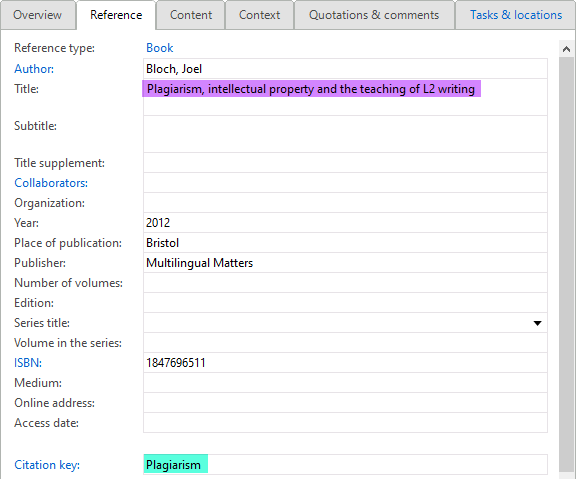 In the citation style editor (footnotes):

Here is how the Citation key is used for "Court decisions": 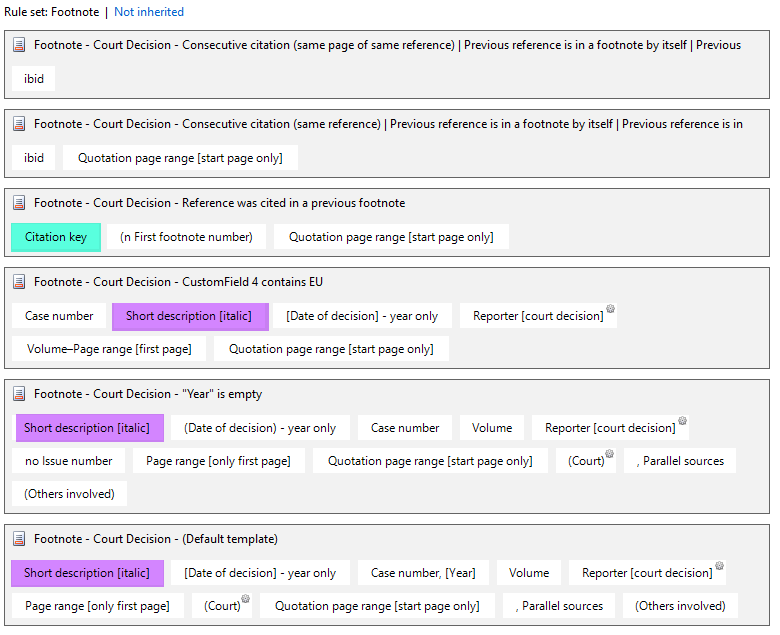 Thanks. So I think you're saying that I should just change the Default citation key to Title and not worry about trying to restrict the change only to the Court decision citation key?

Thanks I'll give it a try

Replies have been locked on this page!