Why should projects not be saved in a Dropbox, Google Drive, OneDrive, Nextcloud or ownCloud folder?

Citavi is designed to safely complete transactions even with unreliable network connections. After each transaction Citavi closes the project (which is a database) and opens it for each new transaction. This opening and closing occurs in a split second.

The following scenario can occur: Citavi just closed the project. Dropbox, Google Drive, OneDrive, Nextcloud or ownCloud notices the new version and attempts to upload the Citavi project to the server. If the project is somewhat larger or the update takes a bit longer for some reason, you might try to enter additional information during the upload. In the worst-case scenario this can lead to a damaged project.

If you still want to synchronize using Dropbox, Google Drive, OneDrive, Nextcloud or ownCloud, the following solution might be helpful:

On the Dropbox menu (the other providers have a similar feature), click Pause syncing before you open a Citavi project, and then click Continue syncing after you have finished working with Citavi: 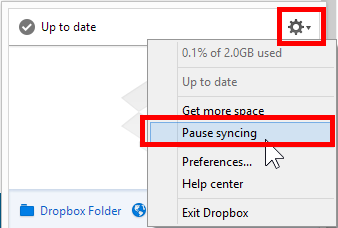 Important: A WAN in combination with WebDAV, Remote FTP, Dropbox, OneDrive, Nextcloud, ownCloud or any similar protocol or online service is not supported.